Quite a few years ago I started to grill my caesar salad, adding ingredients to the traditional recipe. This recipe that follows hasn't been written down, I usually just wing it from my caesar salad recipe. Now it isn't written in stone, make your own version, make this recipe your own. This is one of our most favourite salads! 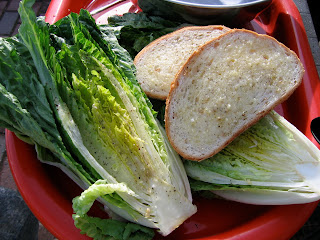 romaine halves and bread waiting to be grilled 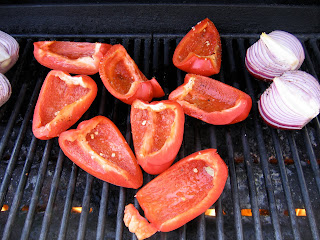 peppers and red onions on the grill 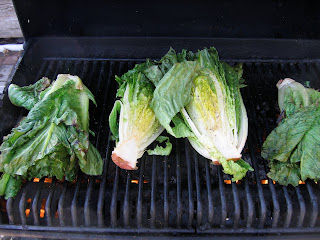 romaine halves on the grill

Blend the oil and the garlic in the blender. Now before you add the rest of the dressing ingredients brush this garlic oil mixture over the cut side of the lettuce, over the onions, peppers and the bread. You may have to top up the oil in the blender back to about 1 cup and then add the remaining dressing ingredients in the blender and blend until smooth. Set aside until ready to use.
The Salad
Grill the onions and peppers first. The onions halves will separate into layers, watch that they don't slip through the grills. Grill until they have soften and browned, do not burn. Then grill the lettuce, bottom side first then the oiled top, just until the lettuce has started to wilt and has grill marks on it. Just a little browned edges, again do not burn. Grill the bread last, just so it is nicely toasted on both sides.
Bring everything in, cut the ends of the lettuce and chop into bite sized pieces. Do the same wit the onions, peppers and bread. Mix it all together in a large bowl. Add the bacon and the parmesan, mix well, and toss with the dressing and enjoy!
Posted by Pegg at 9:28 AM

That looks delicious, Pegg! :) Thanks for sharing the recipe. Must try it out!